The High Strung Tour with Heil 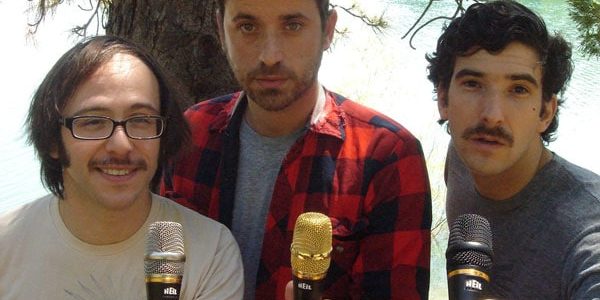 The High Strung have played over 600 shows in the last 4 years. With a touring life that on a good day is hectic, the band chose Heil Sound microphones to be one of their few constants. All three group members sing and count on Heil PR 22s for vocals, while PR 30s and PR 40s round out the backline microphone needs. In May, the band, consisting of Josh Malerman, Chad Stocker and Derek Berk, embarked on yet another tour, this time in support of their new album entitled, Ode To The Inverse Of The Dude. Paste Magazine reviewed the new work and said, “Detroit-based trio The High Strung teamed up with producer David Newfeld (Broken Social Scene) for its fourth LP, Ode to the Inverse of the Dude, and together they’ve made an album that could knock the walls of Jericho down.”

To describe The High Strung as a merely interesting group is a gross understatement. From their heartfelt and completely unsolicited gift of their tour van to the Rock and Roll Hall of Fame (“Dear Rock and Roll Hall of Fame: We believe rock and roll can make man heroic, make man Superman, can make giants out of the audience and artists alike”) to their inclusion of public libraries on tour stops, their upbeat sense of adventure and humor-filled innovation is evident in every song they perform. Rolling Stone magazine called them one of the best new bands in America, and National Public Radio featured them on “This American Life.”

Bassist Chad Stocker commented on the Heil microphones, “We roll into a town and are often faced with sound systems that are unfamiliar to the band. That is a given in this indie band world that we live in. Knowing that our microphones sound great on the front end is a big relief and really helps the show. Often, the local club sound mixer will ask about the Heil mics saying that the sound of them is excellent. I think they’re jealous.”