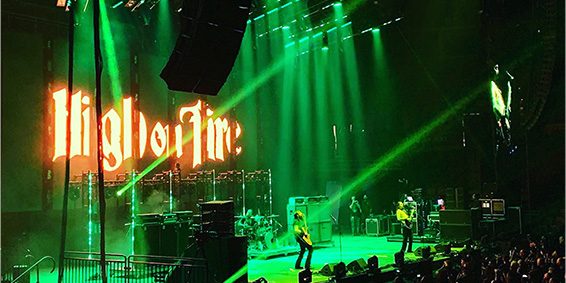 What began as factory support – both from a technical standpoint and product availability – for Heil Sound artists, including YOB and High On Fire, playing at the recent Psycho Las Vegas Festival in Las Vegas, developed into an official microphone sponsorship for the multi-stage, sold-out event that was held August 15-18th.

Entering its fourth year, Psycho – built loosely around hard rock, metal, and psychedelic music – made the move from the Hard Rock Hotel to the MGM Resort, becoming the first major music festival to inhabit a single Strip resort. The event’s activities were showcased among four stages within the Mandalay Bay Resort & Casino with the Events Center arena, the House of Blues Music Hall, and two smaller stages, hosting the likes of The Original Misfits, Clutch, Opeth, and others. Heil Sound mics, including PR35s, PR30s, PR48s and PR40s, were used throughout the venues.

Digital Sound Systems (DSS, Inc), based in Lenexa, Kansas, brought their new L-Acoustics K1 rig with KS28 subs and LA 12X racks. They also provided lights and video. This was DSS’s first year with the festival and company owner, Jeremy Dixon, welcomed Heil Sound’s involvement stating, “It was great being able to add additional Heil products to our kits in the festival scenario. We have several currently out with the Original Misfits tour that has been hitting major markets. Our techs and engineers are all familiar with Heil Sound mics. The PR 30s and 40s always give you the big guitar sounds that engineers and artist want. We were very pleased.”

As with any festival, backline was of key importance and Austin, Texas-based Boss Radio Music Services brought the majority of the amps, drums, and keyboards for the non-touring acts. The company has worked with the festival organizers in previous years, and company owner Buddy Hacher took notice of the cases of Heil Sound mics at each stage saying, “Killer. We got all the good mics here!”

Over at the House of Blues stage, Tatiana Peavey handled mixing duties. “I love how the PR35s deliver studio quality to vocals as well as hold up under the pressure of brutal metal growls and belts without distortion. For doom metal, I like to throw as many mics on the bass as I can get away with; I had two PR40s in addition to the PR48 on the bass rig for bass intense bands like Warhorse and VIO-LENCE. What blew my mind was the detail the 48 gave the low frequencies—I was hearing detailed strings in the low end that I rarely get at metal shows.”