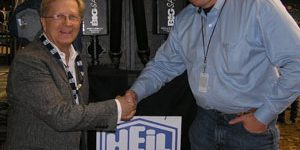 The Professional Bull Riders (PBR) has become one of the fastest growing sports organizations in America, selling out arenas usually utilized for rock concerts and hockey or basketball events. Each weekend during the PBR’s broadcast season, the top 45 bull riders in the world face off against the baddest of the bad bucking bulls for a share in prize money and glory. More than 100 million viewers tune in each year to the PBR on FOX, NBC, VERSUS and on a host of foreign networks across the globe. Heil Sound has been quietly forging and strengthening a relationship with the PBR, which recently culminated in Heil becoming an official microphone supplier.

In addition to Heil PR 35s used by announcers, Brandon Bates and Clint Adkins, and Heil Sound Pro Set Plus headsets, PR 30 mics are also utilized. PBR’s production manager, Clayton Cullen said, “Often we will have nationally known country artists perform on our famous “shark cage” structure located in the center part of the arena during intermission at the PBR events. Whether they are singing the National Anthem or their latest hit, we put them on Heil PR 30s. These are the greatest mics we’ve come across. We’re using them for all types of applications and they’re performing flawlessly. They just cut through all the room noise and slapback and deliver the cleanest, most articulate sound we have ever gotten out of our rig.”

Giving credit where due, Bob Heil explains, “my wife Sarah (VP of Heil Sound, by the way) is a huge fan of the PBR and attends events throughout the season, which begins in January and ends with the World Finals held in October in Las Vegas. We were invited to a sponsor party where PBR funnyman Flint Rasmussen was attempting to entertain these very important guests. The sound wasn’t happening and so in my usual “inquisitive’ way I helped them get the sound system working properly. The rest as they say, ‘is history.'”