I just returned from the New Media Expo (NMX) show in Las Vegas, a trade show dedicated to all things having to do with digital media, content creation, and, especially, podcasting. It was held in the convention center and piggy-backed on the huge National Association of Broadcasters show, a shrewd move on the part of both show’s organizers. Heil Sound put a small booth together with the idea of dipping a corporate toe into the podcasting world.

The podcast market is one that we’ve been taking notice of recently with several prominent podcasters using the Heil PR 30 or PR 40. For this show we brought in a ringer in the form of Dave Hines, a professional voice-over talent, podcaster, and radio personality. Dave originally hails from Springfield, Missouri and now lives in Los Angeles. He also happens to be a long-time friend of Heil Sound’s Michelle Levitt and her husband, Ash.

The booth set-up was simple and straightforward; a PR 30, PR 40, PR 35, and Electro-Voice RE20 were arranged on Heil PL-2T booms and run into a small mixer. Visitors could compare the various models using their own voice. Heil ProSet 3 headphones were available for monitoring. The RE20 is considered by many to be a sort of benchmark for broadcast and spoken word use. Sort of a benchmark…

Dave conducted the product demos at the Heil Sound booth and it was a joy to watch folks reacting to his deep booming voice through the headphones. Imagine having Pavarotti standing next to you, singing a verse and then saying to you, “now you try it.” 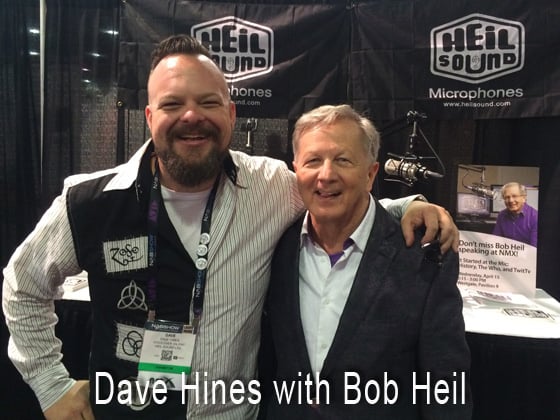 The many visitors who had, or were in the process of developing, their own podcast shows ran the gamut. Some were, frankly, silly – college buddies reviewing old movies while downing shots of tequila, for instance. Others were compelling, such as the gentleman from Ethiopia who used podcasting as a means to communicate real issues throughout his region.

So is podcasting a hobby or a profession? Probably some of each from what we can tell. As with any new or emerging platform questions arise about the fiscal viability for the pros. And there isn’t much data at this point to make any determinations. But that data will come. And, regardless of the data, one thing you can be sure of is that everyone involved will need a great microphone.

The Heil Sound slogan – It Starts At The Microphone – loomed large at this gathering. Unlike the music world where drums, guitars, singers, etc all have a special sound that they are searching for, podcasting involves a single instrument. The voice. Every voice is the featured star.

The message from Heil Sound, reinforced mightily by Dave Hines, is that the person behind the mic shouldn’t have to worry about how to get their sound, rather, they should concern themselves with getting their message out, free of distractions. They might not know, for instance, that the PR40 gets an astounding -40dB of rear rejection. But they will appreciate that the mic won’t pick up their spouse’s (or mom’s) car when it pulls into the garage/studio during a podcast…