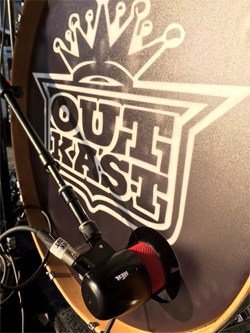 I’m not sure when it happened, but it seems that lately the kick drum has taken over for the lead vocal. More than half of the shows I’ve attended recently have featured such incredible kick sounds that I didn’t even notice the rest of the band. Or the lead vocal, for that matter. That was mainly because I couldn’t hear anything but the kick. Seems some engineers have decided that the kick is the band. Perhaps you’ve noticed trend, too?

OK, that may have been a little bit sarcastic (but not much, sadly). It is important to get a great kick drum sound, and it’s something that we strive for in live sound. The kick forms the foundation of the drum set and as such should have a nice weight to it. As we talk about mic’ing the kick, can we agree that while it’s important, it shouldn’t take over the entire mix? Good, let’s go!

The Drum is an Instrument

We tend to forget this simple fact; drums are instruments, too. As such, they need to be cared for and tuned, just as a sax player would care for and tune up his sax before playing. Worn out heads, damaged beaters, loose hardware or inconsistent tension on the drum head can lead to all sorts of weird sounds. Before breaking out the mic’s, take a little time to make sure the kick drum sounds great on its own. Everything else gets easier from there.

Different kicks will have different sounds. Depending on the size, wood and heads, some may sound big and boomy, while others are tight and boxy. The heads and beater also make a big difference in the sound. A clear beater head will sound brighter and more open, while a coated head will tend to be warmer. A wood beater will have more click and attack, while a felt one will be warmer and rounder sounding. Make sure the drums sound the way you want them to before trying to fix it with mic’s and EQ.

Listen critically to the unmic’d kick first to figure out what sounds to emphasize and what to cut. Choose your mic based on its frequency response in those areas. By carefully selecting the mic to enhance the sonic qualities you’re after, you’ll be doing a lot less EQ. In turn, this will keep the phase of the low end clean. Remember, phase is time and at low frequencies, a little phase shift is a lot of time. Keeping the low end tight means keeping phase shifts to a minimum.

Most classic kick drum mic’s are of the large diaphragm dynamic variety. That’s not to say you won’t find any condensers or small diaphragm dynamics in the kick, but when you do they are usually part of a two-mic setup. The kick drum moves a lot of air, and the diaphragm needs to be able to handle high SPL without breakup. Almost all manufacturers make mic’s tailored for the kick.
Most—but not all—mic’s suitable for the kick will have significant presence at 100 Hz, with a slight boost somewhere in the 2-5KHz range to catch the snap of the beater hitting the head. This high frequency boost enhances the definition of the kick, helping it become the timepiece it’s supposed to be instead of just a wash of low end.

While it’s pretty easy to get a great position quickly on a snare or tom mic, the kick can be quite tricky. Part of the trouble comes from the front head (also called the resonant head) of the drum itself. You’re likely to find completely solid front heads, heads with holes cut in them or no front head at all. Each configuration will produce a different sound with no mic, and each present different challenges with regard to placement.

With a solid front head, your options are fairly limited. You’ll be placing a mic in front of the kick, which will likely yield good low end, but also a lot of spill from the rest of the kit. There will probably be a lack of definition as the mic in front can’t really hear the beater hitting the beater head. If that’s an issue, try putting another mic on the beater head. Sometimes a small mic pointed right at the beater will give you the definition you need, while the front mic provides the oomph. Keep in mind it may take a bit of tweaking with the polarity switches to get it sounding right.

Depending on the drum, you may find internal resonances that build up inside which can cause either cancellation or a big boost for certain frequencies. Before you go reaching for that EQ knob, try moving the mic around until you get the best sound you can with the EQ strip flat. This advice holds true for everything, but it especially important inside a kick drum.

You may also come across kick drums with no front head. The kit I mix most often is set up like this. We have found it gives us the best access to positioning the mic where we want it for optimal balance between snap and boom. And it still provides enough isolation to be useful. I kind of like this configuration, though I would by no means call it a requirement.

No One Right Way

As with many things in audio, there is no one right way to mic a kick. So much will depend on the drum, the style of music and player, and what mic’s you have available. Even space can be a consideration if the drums are behind a shield.

Getting the best kick drum sound is a combination of careful mic choice and placement, along with a well tuned and played drum. It’s much less about the plugins, EQ, compressors or how many subs are in the system. By paying attention to the fundamentals, you can capture a kick drum sound that provides a solid foundation for the music without overpowering everything else.

Mike has written over 1,500 articles that have been read widely across the world. Mike works as a Project Manager for AVL Projects at Visioneering Studios in Irvine, CA.

For 20 years Mike has also been active as a technical arts director for a variety of churches. We are thrilled to provide this series of articles on live sound techniques from Mike.