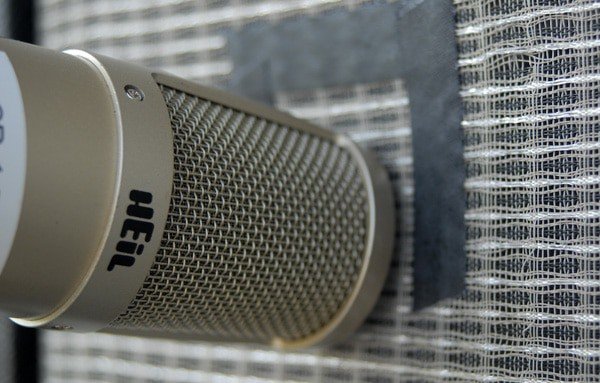 Coming up with a good way to mic a guitar cabinet can be tricky business. Most guitar players I know are very picky about their tone. As sound engineers, it’s up to us to respect the sound the artist is going after, while finding a way to integrate it into the mix.

I’ll say at the outset, the best guitar sounds I’ve come up with in my career have been the result of a partnership between the player and me. By working with the player to select and place the mic’s, you will likely end up with a better overall result and win a friend.

With that said, sometimes you find yourself working with a player whose sound is just terrible and with strategic mic selection and placement you can really make an improvement in the overall mix. We’ll get back to that in a moment. First, let’s consider where to start when you find yourself faced with mic’ing a guitar cabinet.

A guitar cabinet is really just a small PA system for the guitar. Some utilize separate components for the pre-amp and amplifier/speaker, others are integrated into one box. For our purposes as engineers, we don’t care that much if there are separate components or one. What we care about is the makeup of the speaker section. Some electric guitar speakers are single driver units such as a Fender Mustang. Others, say a Vox AC30, are dual speaker models with two drivers in the case. It’s important to know what you’re dealing with when getting the mic’s out.

If I’m mic’ing up a cabinet I’m not familiar with, the first thing I do is look at it from behind to see what the driver configuration is. Sometimes you can tell from the front, but not always. This is important because like everything else we mic up, positioning will dramatically change the sound we get.

If at all possible, I ask the player to play while I simply listen to their rig. I want to know what kind of tone he’s putting out before I re-amplify it through the house PA. I listen for how bright or dull it is, how much distortion he’s using, what other effects I need to pay attention to and where his part fits in with the music.

For lead guitars, I’ll lean toward a slightly edgier sound. I want that guitar line to stick out in the mix, especially for guitar-led songs. Rhythm guitars tend to be a bit more mellow in the mix. We’ll want to choose our mic’s and mic positions accordingly for not only their tone, but application.

As a general rule, placing the mic toward the center of the cone will yield a bright, sometimes harsh sound. As you move further out toward the rim of speaker, it will mellow out and you’ll start to hear more overtones. I have often heard some really harsh guitar sounds coming from PA’s and seen guys try to fix it with EQ.

A better solution might be to simply move the mic 5 inches to the right or left. There are no hard and fast rules here, but because we all need a starting point,

I usually start lead guitar mic’s about midway between the center of the cone and the rim. That doesn’t always work, but you have to start somewhere. For a rhythm guitar, I’ll tend to push it out further towards the edge of the driver.

Now, if you have a couple of guitars on stage and they all take turns between lead and rhythm, you can start to have some fun. In that case, I like to double-mic the cabinets and vary the balance between the mic’s based on what they are playing. In this way, you can have the best of both worlds; bright when you need it, mellow when you don’t. You can also achieve some really interesting sounds when you combine the two, especially when you add some delay. More on that in a minute.

The fun thing about mic’ing guitar cabinets is there is almost no wrong mic for the job. Almost more than any other instrument, experimentation is really fun and can lead to some great results. For years, the go-to mic has been a medium diaphragm dynamic. I would guess more shows have been mic’d this way than with anything else. While it’s a solid choice, it’s not the only way to go.

While ribbon microphones have become popular in some circles, they are expensive and many are too fragile for live work. Personally, I’ve found great success with large-diaphragm dynamic mic’s like the Heil PR-30 and PR-31BW. If I have only one channel open for a guitar, that tends to be my first pick.

However, depending on the sound we’re going for, sometimes a more unconventional choice works really well. For example, the Heil PR-28 is marketed as a drum mic, but it can perform remarkably well on guitar cabinets. It has a very high SPL limit, which is well suited to the guys who just have to crank it up to get that sound. It also has a tailored frequency response that works quite well with electric guitars.

Sometimes the best selection is a combination. I’ve been known to put two different mic’s on a cab, especially a dual speaker model like an AC30. I may put a PR-30 on one driver halfway between the center and the rim and another mic, perhaps a PR-22 on the other driver closer to the center.

The high frequency presence peak of the PR-22 combined with a closer to center placement can give me the edgy sound I need for some songs, while the mellower PR-30 in the middle serves up a great rhythm sound. But wait, there’s more!

If you want to have some fun, open up some space for vocals and create a bigger guitar sound, try this trick. With two different mic’s on two different channels, pan them left and right. How far you go depends on the PA coverage and how extreme you want to get. Put somewhere between 30-50 milliseconds of delay on one mic. I usually set my delay based on the tempo of the song, and find that a 32nd note worth of delay works well (use a beat calculator to do the math). Suddenly, the single guitar will sound like two.

And with it panned out left and right, you open up the middle for vocals, while still keeping the guitar very prominent in the mix. This trick works best with two completely different mic’s, but if you have two of the same, play with placement and EQ to get different sounds.

As I mentioned earlier, too many times guys will try to fix a mic selection or placement problem with EQ. While this can work in a pinch, the better solution is to move the mic or try a different one. If you have a helper, have them move the mic around while the artist plays and see what sounds right in the house.

Do this with the EQ flat and don’t touch the EQ until it sounds as good as possible based on position alone. Now you can use the EQ for subtle tonal adjustments or artistic reasons instead of major surgery.

Mic’ing guitar cabinets really can be a lot of fun. Leave yourself enough time to experiment when working with a new player or cabinet. It never hurts to have several mic’s on hand to try and if you can, use two more to vary the sound. When you get it right at the source, the musicians will be much happier, as will your audience.

Please check out all of our blog articles on mic’ing instruments.

Mike has written over 1,500 articles that have been read widely across the world. Mike works as a Project Manager for AVL Projects at Visioneering Studios in Irvine, CA.

For 20 years Mike has also been active as a technical arts director for a variety of churches.