How To Use Overhead Mics on a Drumkit by Mike Sessler 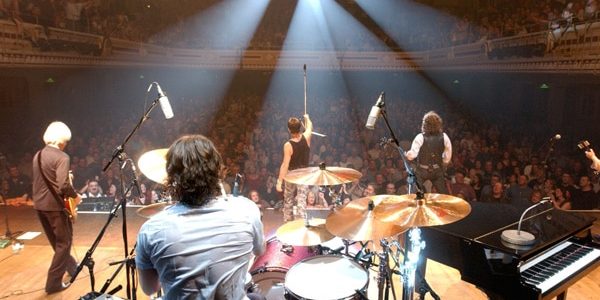 I have a bit of a love-hate relationship with cymbals. And to be honest, it leans more toward the hate side. Getting cymbals balanced in the mix, especially in smaller rooms, can be challenging. Often, we wind up with too much ambient cymbal sound, which can overpower the mix. But if the cymbals are coming from stage and the rest of the band (including the drum kit) is coming from the speakers, it sounds disjointed. So, we mic the cymbals anyway.

What’s a FOH guy to do? Thankfully, the point of this article is not containing ambient drum sounds. Instead, we’re going to talk about ways to mic the drum kit from overhead.

The first question we have to answer is whether we’re trying to overhead mic the entire drum kit or just mic’ing the cymbals. The way I understand it, overhead drum kit mic’ing is a technique that started in the studio. It makes sense; you’d want a mic or a pair of mic’s to pick up the sound of the whole kit.

The drum kit is one instrument, so a homogenous sound is important. The idea is to capture the sound of the kit in the room, which helps it sound more “live.”

Other engineers would take the counter-point. To keep the drum kit sounding cohesive, we need overheads that pick up the whole kit.

Each technique has its own pros and cons. We’ll look at both ways to do it, and you can decide what works better for you.

The overhead technique is typically based around two mic’s placed a few feet above the cymbals. Some engineers will use two mic’s on two stands at roughly the 1/3 and 2/3 points across the drum kit from the front, and centered from the side. Another option is use two mic’s in the center in an X-Y pattern.

Both models will create a sense of stereo in the kit. Which you choose will depend on the stands and mic’s you have available, and what sound you prefer.

Many guys use condenser mic’s for this application, preferring the increased sensitivity and fast transient response. For a long time, I used this technique—until I discovered large diaphragm dynamic mic’s, such as the Heil PR-30.

Dynamic mic’s have very high SPL-handling capability. And modern designs are just as fast with transients as condenser mic’s. They also have the advantage of not picking up everything else on stage, which I really like.

Whichever mic’s you use, you’re going to need to pay attention to time. Overhead mic’s will pick up a good deal of snare, and a spacing difference of 2-4 feet will cause 2-3 msec of delay between the two. When those signals combine in the mixer, significant phasing issues are going to result.

It’s actually possible to make a snare sound quieter by bringing up the overhead mic’s. When you hear this, its time to delay the snare back to the overheads. The same goes for the tom mic’s.

The timing issue is one reason I prefer close-mic’ing my cymbals. For modern rock-style music, I don’t really need a sense of ambience from my drum kit. I just want it louder. We’re already close-mic’ing the rest of the kit, so it makes sense to close-mic the cymbals.

I have been close-mic’ing my cymbals with a pair of large diaphragm dynamic mic’s for about 4 years now, and really love the results. To me, the dynamic mic’s sound less brassy and harsh than condenser mic’s. I find this amplifies me less of the annoying characteristics of cymbals.

There is a downside to this technique. Remember that the drum kit is one instrument. By slicing up into its component parts, you really need to pay attention to getting the overall mix right. Some also feel the overhead technique is better for IEMs.

Another option that is getting a lot more attention lately is under-mic’ing the cymbals. We’re seeing this on major tours and many house of worship venues. Besides cleaning up sight lines by removing mic’s and stands from above the kit, it has many of the same advantages of close-mic’ing from overhead.

Like almost any mic technique, placement is key and will take some experimentation. A friend of mine suggested starting with the mic one and a half to two fists below the cymbal, about half-way between the bell and rim.

Getting too close to the bell starts to sound weird fast, so beware of that. Ideally, the mic’s will mount in such a way that they move up and down if the player raises or lowers the cymbals. That, too may take some experimentation.

A lot of guys use small pencil condensers for this task. I find I get too much spill with condensers and prefer a short, large diaphragm dynamic like a Heil PR-31BW. Bob Workman developed the 31 for exactly this purpose. The PR-31BW is basically a shortened PR-30, which fits in below the cymbals much better.

A big benefit of under-mic’ing is that timing issues are mostly minimized. This is especially true when using dynamic mic’s. Their increased rear-rejection will keep the interactions to a minimum, which results in a cleaner, more powerful drum sound.

Play With Your Mics

Like most everything we mic, it’s important to try new things and find out what works best for your application. Experiment with placement, mic choice and technique. Don’t get stuck doing things the same way because it’s the way you’ve always done it. Sometimes, something that doesn’t seem like it should work turns out to be exactly what you were looking for.

How to Mic a Kick Drum

To view all the Heil Sound microphones recommended for a drum kit or percussion instruments, click here.