How I Prep for a Tour – by Robert “Void” Caprio 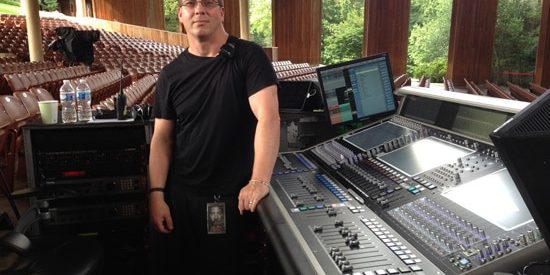 Prepping for a tour is usually a big deal for me. I like surprises but not the kind that show up on the road, those are usually not a good thing. I like to be as prepared as possible so I thought it was a good blog subject to cover what goes on in the preceding days or weeks leading up to a tour.

To start, I always hope have a good bit of time in the rehearsal studio going over the set to learn the material and make sure everything’s ready to go… including myself! If it’s a new artist I’m working with and I don’t have the luxury of rehearsal time with them, I go buy a bunch of their stuff on iTunes as well as check out recent shows on YouTube if available.

To me one of the most obvious places to start with is to advance the shows as much as possible. On the last summer tour I did mixing FOH for Cee Lo Green we were carrying all our own gear (supplied by Clair Bros.) so it was a bit different than having to advance a club or theatre run with gear and PA du jour but there is still a lot of ground to cover. So I sat down with our PM and went through the ins and outs of each venue.

Since we were opening for Lionel Richie obviously a lot of the tech stuff was taken care of by his very capable crew and the Clair guys along for the ride, but we did our part to make all our jobs a bit easier. We also made sure the stage plot, input list and output patch were up to date. I keep all my artist’s tech packs in pdf form up on my web server so it’s always available and I can just point people to the link rather than have to send an email with attachments that may or may not go through a spam filter or are too big for someone’s inbox.

One of the things I do often and especially prior to a tour is go through and check out all my mics to make sure they’re in top condition. I first check them over to make sure nothing’s loose or broken on the outside and nothing rattling on the inside. If all is well there I then perform a noise test. I blast pink noise out of a speaker at about 85dB (A weighted) and put the mics up to the speaker one at a time and look at their output in SMAART. I’m not looking for perfect audio precision here, just an obvious problem like a huge dip in the high end or something like that. It’s actually rare that I catch a problem but it does happen and when that occurs, off to the manufacturer that mic goes for a ‘refreshing.’

When I know my mics are ready to go I can check over any other gear I’m bringing. I make sure I also have spares of some of the more important items. Among these are my iLoks for plug-in and Pro Tools authorizations. I make sure they’re all up to date with the newest versions and installers as well as confirming that my “Zero Downtime” account is active and not about to expire.

I also have at least two hard drives (solid state these days) with files and backups of EVERYTHING. Two is one and one is none! I also download all the latest drivers for any gear I’m using that require them but the catch is I don’t install a new driver until I need to. If it ain’t broke… well, you know the rest.

From a stage point of view I make sure all the mic cables are in good shape with no breaks in the insulation and that they’re all loomed together if possible. I double-check all the instrument cables too. I confirm that all the mic stands are in good working order. I can’t stand mic stands that are loose and floppy so I go over these with a fine toothcomb to make sure nothing’s going to fall over during a show.

This is a big reason that I use as few mic stands as possible. I like the cleaner look of a stage with less mic stands on it and there’s obviously less chance of a stand tipping over. I use lots of “claws” on the drum kit in addition to my own “L-bars” on guitar amps.

Now that I’m on a club tour mixing FOH for Wiz Khalifa my tour prep routine is still largely the same yet I do have to reach a bit further to the house guys in each venue to make sure we’re all on the same page. Input lists, plots and all that are updated and any gear being carried gets a once-over to confirm proper operation. Since we’re not carrying production (except for my mics, RF mics for Wiz and IEMs) and I could be faced with a different console every night I build show files for all the digital consoles and store them on multiple USB sticks.

I’m always shocked to hear from house techs that so and so just came through their house and had to build a show on a digital desk from the ground up. I simply can’t imagine that. For me it’s a simple matter to download the appropriate offline software and go to work. We all know we have enough downtime to do it so in my opinion there’s no excuse for showing up without even a rough, basic show file on a USB stick.

From a personal luggage point of view I make sure my bag is packed with all the essentials for a tour. Two pairs of shorts, at least two pairs of long pants (jeans and Dickies work pants), one nice polo or dress shirt, plenty of socks and underwear, bathing suit, flip-flops (for the bus, those skanky showers and the hopeful pool/beach days), a hoodie, rain jacket and finally about a dozen t-shirts (H&M sells ‘em cheap)…mostly black or dark grey of course.

I know as an FOH engineer I don’t necessarily have to wear the “roadie uniform” but it’s so ingrained in me at this point that it’s just a habit to buy those items. As far as toiletries I carry all the usual suspects… toothpaste, toothbrush, toothpicks, deodorant, shaving cream and razor, shampoo and bar soap (not every hotel provides this, and certainly the venue showers don’t), handi wipes, bug spray, sunscreen, vitamins, cold medicine, pain reliever, etc….

There’s always more and of course things change often but generally speaking that’s the gist of it.
I love my job! 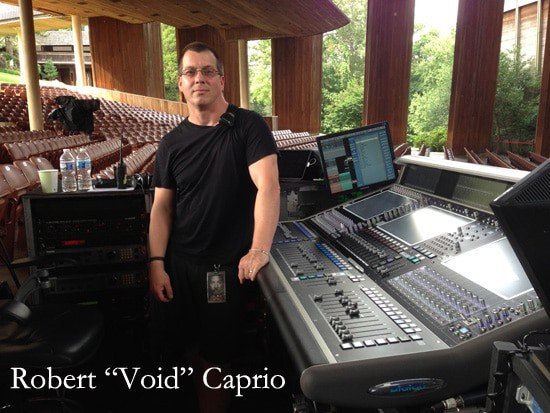 Robert “Void” Caprio has been a great FOH (Friend Of Heil) for quite some time now. He is a Long Island, NY “renaissance man” with extensive experience behind the console, both in the studio and live. He has toured as FOH/MON engineer with great artists such as Wiz Khalifa, Cee Lo Green, Ms Lauryn Hill and Eve 6.

VOiD has also been achieving success as a composer having recorded & released three albums for music library companies OneMusic & 615 Music. VOiD’s compositions have been heard extensively on the Travel Channel, Discovery Channel, Food Network & Saturday Night Live among others.