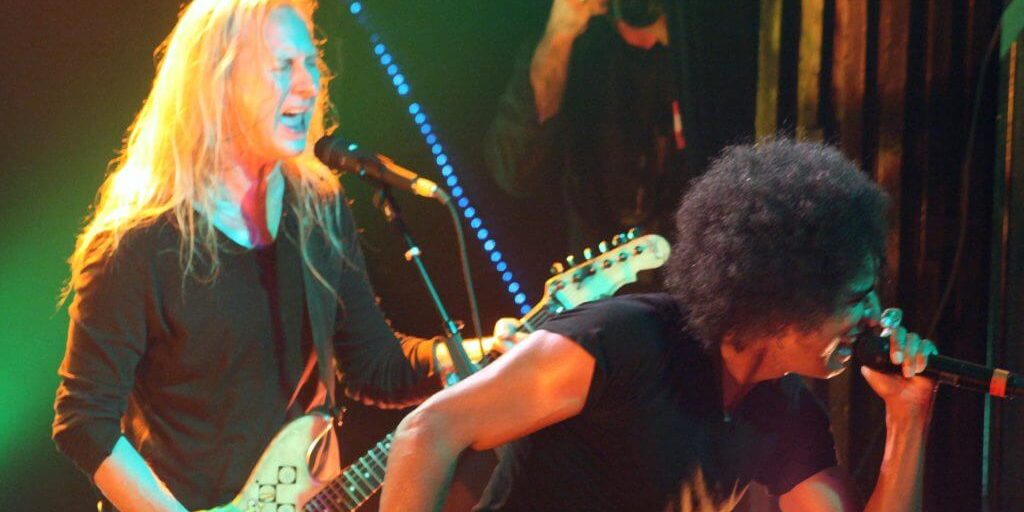 Alice in Chains first album since 1995, “Black Gives Way to Blue,” debuted at Number Five, selling more than 126,000 copies in its first week. The reformed band-with new singer William DuVall replacing the late Layne Staley-also hit the promotional concert circuit in earnest with an appearance on Jimmy Kimmel Live, as well as multiple day shows throughout September. With a new singer and new album in place, FOH mixer, Tom Abraham, brought in new Heil Sound microphones. Abraham has worked with Velvet Revolver, Shakira, and Garbage, among others, and has been a proponent of Heil mics for some time. “Switching to Heil mics has allowed me to get the greatest gain before feedback of any other microphone that I have ever used.”

The stage is total Heil mics with PR 30s housed in off-stage guitar iso boxes for Jerry Cantrell and William DuVall’s guitar rigs. Drummer Sean Kinney’s custom DW kit utilizes the Heil HDK-8 drum mic kit with additional PR 30s used for “underhead” cymbal micing use. According to Abraham, “The PR 48, PR 20, and PR 22 kick, snare, snare combo is just awesome. I mean, perfect, really. And I am amazed by the PR 30s on the cymbals. Such separation and clarity.”

With the addition of William DuVall, the band has two lead singers who, according to Abraham, are radically different in terms of style. Jerry likes to sing from different fixed positions on stage while William prefers to move about freely with the use of a handheld wireless. To accommodate this line up two Heil PR 35s on stands are positioned at stage left and stage right and a RC 35 wireless capsule is used with a transmitter for William’s “roaming.” The wireless also gets used center stage on a stand for portions of Jerry’s featured songs. To minimize problems and still utilize one wireless mic, a two-channel receiver is used with both channels set to the single microphone’s frequency. The outputs are then sent as two channels to the house and monitor consoles thus allowing Abraham and monitor mixer, Scott Tatter to easily control each singer’s equalization and fader settings separately.

Alice in Chains begins a European tour in November that will last until just before Christmas with a U.S. tour planned for 2010. Whether they are playing the Lucerna Music Bar in the Czech Republic or The Joint in Las Vegas, the band’s Heil Sound mics will be along for the ride. Tom Abraham sums it up best, “Bob Heil and the team at Heil Sound are always responsive and available. They actually understand that we work in a ‘no excuses’ environment. That means a lot.”